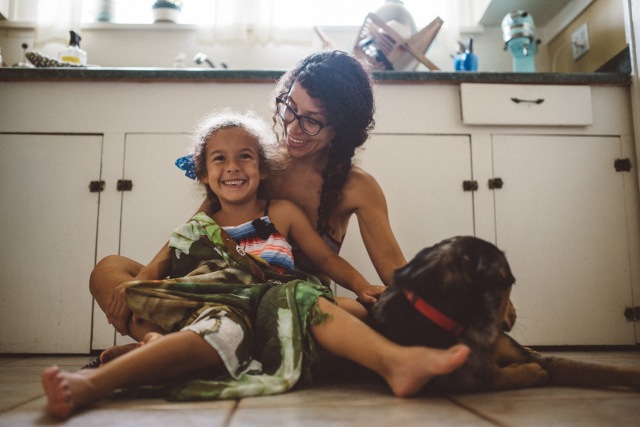 We spent our fourth piled together in different rooms of the apartment.  Baked cookies and dog treats. Put up with some sass from my girl who did not appreciate me correcting her spelling of ‘etymology’ and who at some point declared that I “didn’t understand her sarcasm.” My daily dose of panic came when she choked on a piece of bacon while eating breakfast (America!), made even worse by the fact that I watched Okja the night before and was already feeling guilty about said bacon.  Though we haven’t been feeling particularly patriotic lately, we were invited to a beach house by a friend, went, and had a fantastic time.  Life often feels like the strangest of all experiences, but I am glad I get to do it with these people. 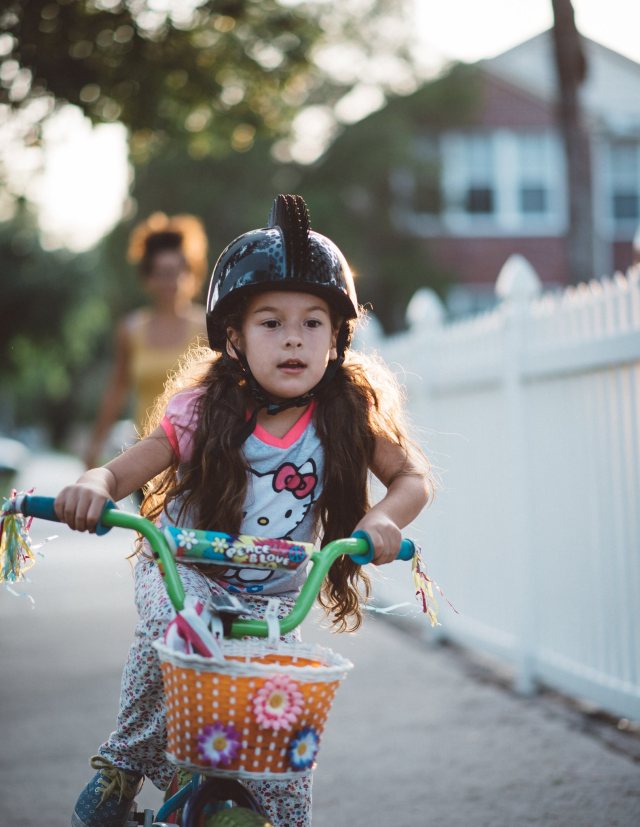 A few weeks ago Foos learned to ride her bike without training wheels.   We got her this bike two years ago, when she was still so little that harvesting the strength to simply get the pedals moving seemed like herculean task. Even recently, if she went a few weeks without riding the bike it was as if she was getting back on it for the first time— slow and unsteady, like a drunk walking a line.   She rode her bike to the park that morning, where she befriended a fellow bike rider, an older girl named Jessica, who turned Foos into her disciple. They excluded the bikeless from their schemes, chased each other in figure eights, raced to a victory line of their own making, and stopped short of a stranger enough times I contemplated leaving the park for fear of injury.  During one of these loops, Jessica explained to Foos that her training wheels sometimes didn’t touch the ground.  In fact, she may not need the training wheels at all! I watched this revelation unfold from afar, Jessica pointing to the wheels, Foos’ initial confusion and realization. Foos seemed so pleased by this news that when she rode her bike to tell me, grin on full display, I didn’t have the heart to tell her that the wheels where designed that way.  But Jessica had planted the germ, and I was going to take it as far as I could.  As we were leaving the park I casually mentioned removing the training wheels, and she agreed without hesitation.

That afternoon, I fashioned knee pads for her out of tape and leggings while Seth removed the training wheels.  We gave her the pep talk—you will fall down, you will get hurt, you may not get it today, but eventually you will.  She rolled her eyes and walked her bike to the empty lot, the tape of her knee pads making noise every time she bent her knees. The expression on her face like she had been doomed to damnatio ad bestias. With seth holding on to the bike they went around the lot a few times. The first time he let go, she fell.  The second time, she fell.  The third time, she fell too. Big fat tears rolling down her face, threats of quitting and going back upstairs coming out of her mouth.  We had been reading The Hobbit the night before, and I sat her on my lap and asked “How would you introduce yourself to Smaug? I know how I would.  You are the never quitter, the rider of bikes, the scrape eater, queen of wheels,” and so on. She nodded her head. With her dad running after her, and me shouting introductions to Smaug, she got back on and fell down about a dozen times.  A couple of our neighbors came out to cheer. Twenty minutes later she was going around the lot on her own.  An hour after that, she was riding down the block.

She told us she promised her bike she would ride her everyday, and she almost always does.

Yesterday I was in my kitchen cave, listening to Radiolab and making dinner, when I felt a tiny tap on my back.  When I turned around, my Foos was standing there, holding up this piece of paper and beaming at me. I got all verklempt, fell to my knees, and gave her the biggest squeeze. People say a lot of cheesy shit about their children, most of which feels obligatory, but this girl, you guys, makes me feel like the luckiest mom in the Virgo Supercluster.

One of the things that never ceases to amaze me about living in Northern Florida is the variety of green/historical places we get to enjoy. Recently, we’ve been going on hikes at the Timucuan Ecological & Historic Preserve. Through some miracle we found a trail that was just right for all of us – Foos included. She likes to run ahead of all of us, and I like to worry about said running ahead, even though by now I’m sure she knows the trail by heart.  I like to linger behind my family, mostly staring down at the roots with the misfortune of being in the middle of the trail, looking up once in a while to make sure everyone is still accounted for.  The trail ends in a breezy lookout we usually monopolize, annoying the shit out of other hikers by taking up the benches, audibly snacking, and singing Moana songs into the marsh. I love my family. 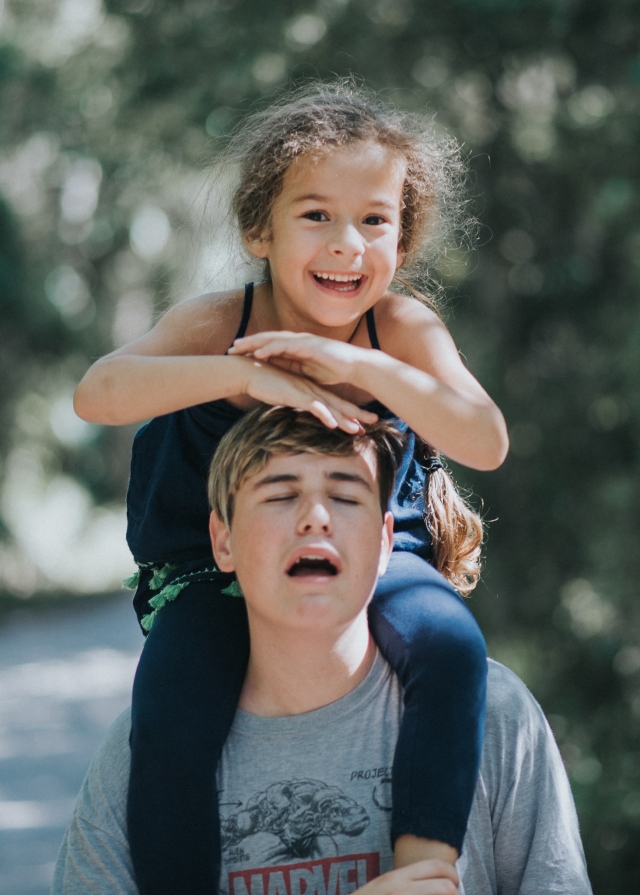 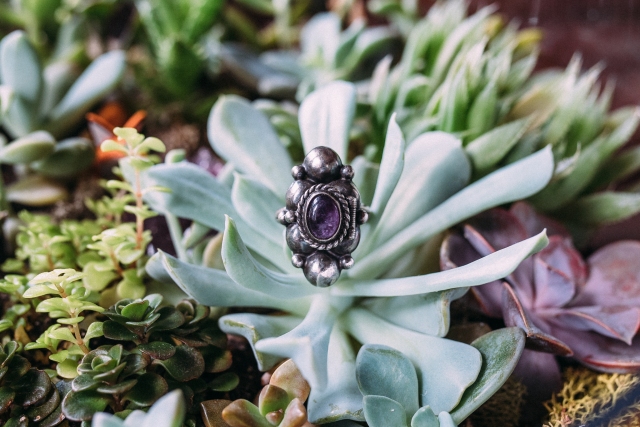 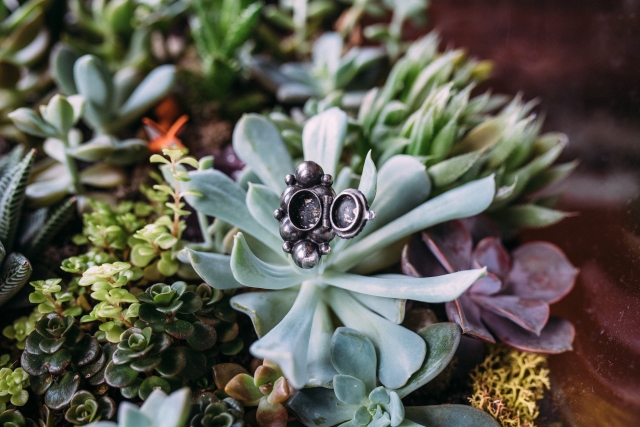 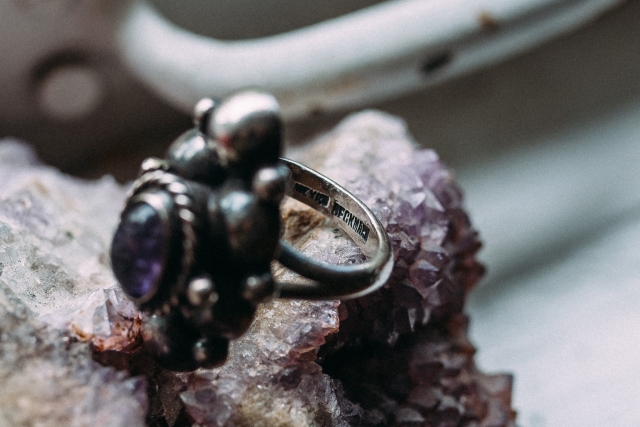 Interrupting my regular posts about books/cute kid/depression/dogs/mild adventures to announce that I am selling something special I’ve held on to for a long time, and no, it isn’t my dignity (long gone), it’s this ring.  And you can buy it!  This ring was made by renown silversmith Carmen Beckmann, whose studio was active during the 60s and 70s in San Miguel de Allende, Mexico. There are a few Beckmann pieces floating around out there, but I have never, ever seen another Beckmann poison ring in this setting (or one as cool as this selling this cheaply).  Her pieces are collector’s items, and this ring is no exception.  Google her/her stuff, super cool, right? even if you don’t buy my ring. This ring is a size 8 (I have fat fingers) but can be resized by a jeweler.  I enjoy the uncleaned silver look, but you can easily clean it up.  The stone is Amethyst.

Have a good weekend, guys!

Seth finally got around to taking nice photos of the vintage hitchin’ ring he gave me in October.  I will admit here that I have never cared for diamonds, but I love this very old ring. I spend more time than anyone should thinking about all of the things that had to go wrong in order for me to possess it. 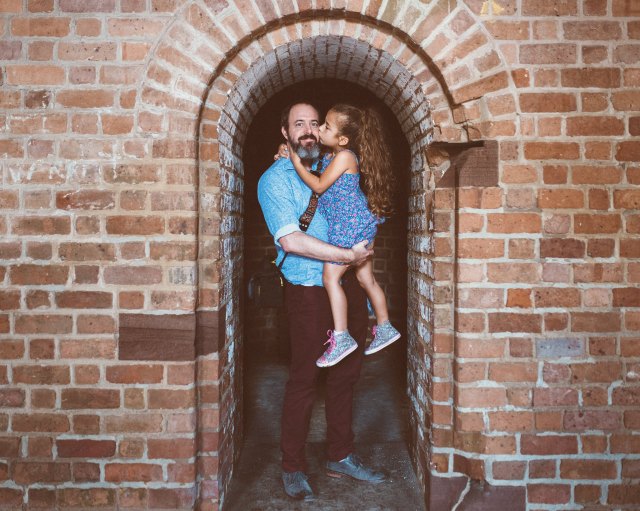 We visited a Fort Clinch this weekend, where Seth snapped these dreamy photos of our spawn. Her, um, shall we say, leadership skills, were put to good use this trip as she told us which way to go, climb, and breathe.  She almost peed off the side of the fort, almost tripped over a cannon, and made me eat the visible mango bits in her ice cream because god forbid her mango flavored pop actually had mango bits in it.  Don’t let my kvetching deceive you, it was actually a really fun trip. Watching her delight in her father and really get into exploring the many tunnels and rooms was a real treat.

We spent the Thanksgiving holiday visiting Seth’s family, making too much noise, eating too much food, and avoiding talking politics as if our lives depended on it. He Who Must Not Be Named was not named, our host was terrific, my thanksgiving hair do was on point, and the dog didn’t puke in the car.  Success!

With dear friends & Jess‘ family at her memorial service a few weeks ago.  It isn’t often I get to be in the same room as these wonderful people, I miss everybody already. 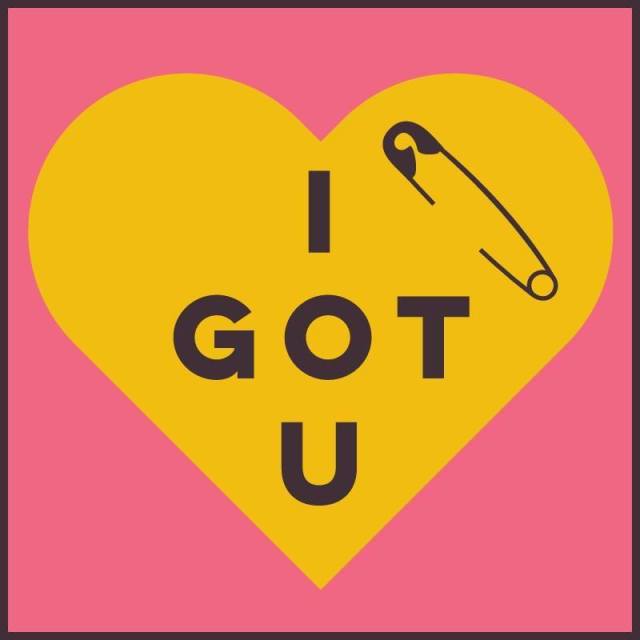 (this image was made by my super talented and colorful friend, Amelia, it belongs to her.)

I don’t need to clarify it here, but I am horrified by the election results.  I was always with her.  Those results were followed by many sleepless nights and tears (no one was more crestfallen than foos), but also with a lot of productive and supportive conversations and visits with friends.  In a weird way, my life and personal routines have not been the same since.  I’ve been mentally preparing myself to intervene should I happen to observe any racist/islamophobic/sexist shenanigans (I haven’t yet).  I have also been avoiding podcasts, newspapers, and blogs I previously enjoyed.  Just hearing his voice and seeing snippets of headlines is enough to make my stomach drop.  I know this is irrational; I also know I will get past this, because pretending things aren’t what they are is never going to bring about change.